Enter the code found on your
Edco Exam Papers here:

The feature I have chosen to examine is limestone pavement.

Carboniferous limestone is a sedimentary rock. It is a stratified rock composed of calcium-carbonate (Ca Co3). It was formed in warm tropical waters where marine creature remains accumulated, compacted and cemented. Carboniferous limestone can produce a distinctive landscape called karst. An example of a karst landscape is the Burren, Co. Clare. This landscape was created due to the chemical weathering of carboniferous limestone. Carbonation is the most significant process involved in the shaping of a limestone landscape. Carbon dioxide from the atmosphere or soil mixes with rainwater to form a weak carbonic acid (H2O + CO2 = H2CO3). This acid alters the insoluble calcium carbonate of limestone to soluble calcium bicarbonate, which is then removed by solution (H2CO3+CACO3=CA(HCO3)2. This process creates distinct features like limestone pavements. Joints or fissures in the limestone become enlarged by carbonation. They are widened and deepened to form grikes. The flat topped residual blocks separating the grikes are called clints. Solution holes called karrens may form on the pavement. 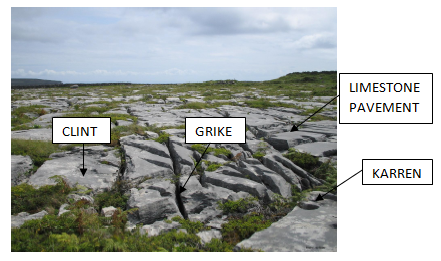 The landform I have chosen to examine is a waterfall - Example Ashleigh Falls, Delphi, Co. Mayo.

A waterfall is a feature of river erosion. Most waterfalls are found in the upper course. They generally develop where a river meets a band of less resistant rock after flowing over more resistant rock. Differential erosion occurs. The less resistant rock is eroded by abrasion (river’s load hits off the banks and bed of the river eroding it) and by hydraulic action (the force of the water itself erodes). The hard rock is under cut. With no underlying support it will eventually collapse. The rock at the base of the waterfall is eroded by the swirling action of the fallen rock, creating a plunge pool. Hydraulic action is an effective process here due to the falling water, which has less friction and more velocity. These processes of undercutting and collapse are repeated causing headward erosion. The waterfall retreats upstream. A steep-sided gorge is created. 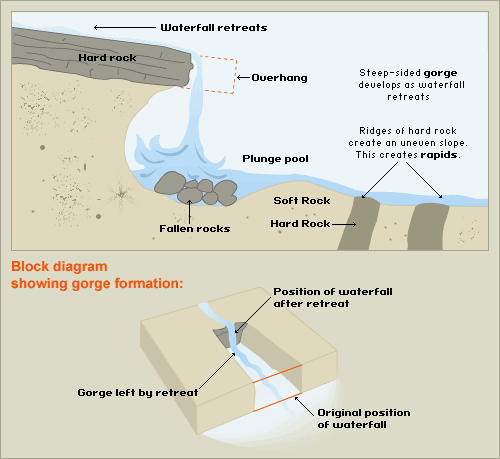 Corries are the birth place of the glacier. They are features of erosion. They usually have an amphitheatre-shaped appearance. These features are formed by several processes, mostly plucking and abrasion. When snow falls and collects in a hollow, usually north facing, nivation will occur (this is also called snow patch erosion). Further snowfall will enlarge this hollow and the snow will turn into glacier ice. When the ice starts to flow downhill due to gravity a Bergschrund crevasse will appear at the back of the corries. Plucking and abrasion will further enlarge the hollow. When two corries form back to back an arête will form and a pyramidal peak will form, e.g. Matterhorn, Alps. When the ice melts a town/lake may remain in the corrie.
Diagram of a Corrie Glacier in cross section: 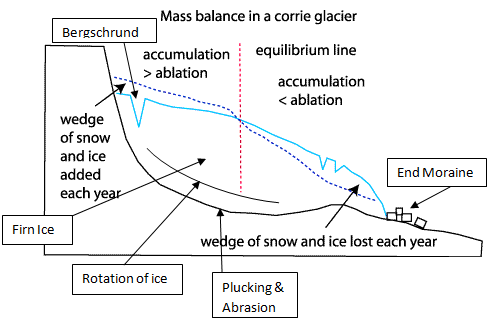